Returning to the real world ...

After an 18-month hiatus, I decided it was time to update my blog. I’ve been home from my mission for exactly two weeks now. I have put off writing because I wasn’t sure how I could adequately capture the last year and a half in one blog. Of course, that would be impossible, so I won’t attempt it. Instead I will do a short series of mission snapshots to give you a glimpse of my experiences.

Nestled in the very center of Salt Lake City is a beautiful 35-acre plot known as Temple Square. This sacred spot of ground was my home for the last 18 months of my life. My assignment as a missionary for the Church of Jesus Christ of Latter-day Saints was to welcome the guests that visited and introduce them to the history and basic beliefs of the Church.

Many people came with very little knowledge about the Church and I loved being able to share our message of hope through the story of the sacrifices of the early pioneers.

You see, the early members of the Church traveled to the Salt Lake Valley in 1847 to escape severe religious persecution. Although the valley was uninhabited and rather barren when they arrived, to the pioneers it was a place where they would finally be permitted to dwell and worship their God in peace. They came with nothing but the few belongings they could fit in their wagons but their hearts were full, knowing that they were being led by God’s chosen prophet.

On a visit to Temple Square, the first structure to catch the visitor’s eye is of course the temple itself. However, this semi-gothic granite building represents more than great architecture – it represents the knowledge the pioneers had that God was in their midst. Knowing that God had again commanded his children to build temples where he could bless them, the pioneers laboured for forty years to complete this house of the Lord.

Every day I was able to stand in the shadow of that holy temple and bear my witness that God loves us today as much as he loved the people we read about in the Bible. But even without my witness, stepping onto the grounds people could feel a sense of peace. One man felt the difference immediately as he stepped inside the gate. It intrigued him and he was seen stepping out, pausing and then stepping back in again. One lady called guest services and asked what kind of air filtration system we had because she had never felt as good as she did when she was at Temple Square.

It is true, that Temple Square can boast of beautiful landscaping, heavenly music and lovely sister missionaries, but I think the peace people feel must be attributed to something else.

Another man who felt something was of the Jewish faith. As I talked to him, he told me he had felt these vibes in very few other places before. One was at the Temple Mount in Jerusalem and the other was at the Tomb of the Patriarchs in Hebron. I found this comparison to be very significant. As members of the LDS church we believe that God has again restored the fullness of his gospel to the earth – the same gospel that he revealed to his ancient people. To me, the feelings of peace I experienced near that holy edifice confirm that.

What a blessing it was to spend 18 months standing on such holy ground. 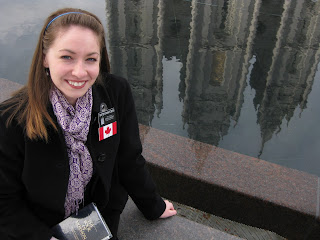 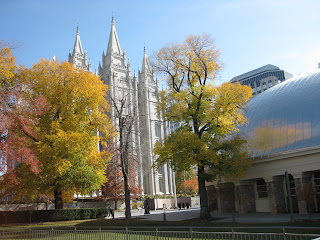 (How's that for excitement?)

Welcome back! (Can I say that if I'm not where you are?)

I loved reading that little "snapshot" of your mission. There is nothing quite like the experience of serving a mission, is there?

I want to hear more!! Did you get to serve a couple of transfers elsewhere? If so, where?! -We LOVED the temple square sisters that came to my mission.

I served three transfers in the Georgia Atlanta Mission. It's funny being welcomed "back" by all my friends in Utah.

jade!! welcome home. i keep meaning to send you a little message. remember when rich and i ran into you at temple square? that was so great! i'm glad you had such a great time.

Wow~ Keep it coming! I have been blog stalking you to see when you would update your blog! YAY! you did it!

Hi Jade! This is Nancy Layton's mom--you are on her blog role and you popped up. Nice to read about your experiences. So are you in B.C. right now? Please say hello to your parents! :o) While you were on your mission, I had the privilege of going to South Africa -- Capetown --what a beautiful place!

Jade! I was pleasantly surprised to see on my blog that you had an update on your blog! I'm so glad you enjoyed your mission. What a great time! Glad you're home and safely!

Welcome back! Even if this doesn't mean you are any closer to me now than you were on your mission. But at least now I get to read your blog posts.

You are such a Temple Square Missionary...