Shakespeare and the Fat Dragon 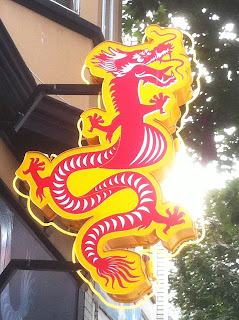 A Vancouver summer is not complete without a rendezvous with William Shakespeare in a tent overlooking English Bay.

Each year Bard on the Beach, a professional Shakespeare Festival in Vancouver, produces up to four different Shakespeare plays, which are presented in tents against a backdrop of mountains, sea and sky in Vanier Park on the waterfront. And each year the Swartzberg girls try to make it to one of the shows.

This year we opted to see The Taming of the Shrew on the main stage, but first we decided to make an evening of it and went out for dinner in Vancouver.

While I claim Vancouver as my home when I’m beyond the borders of British Columbia, I’m actually from Coquitlam, which is why I didn’t blink an eye when I looked up the restaurant and saw that it was on Powell Street in the Strathcona neighbourhood.

When we pulled up in front of the restaurant we were all a bit taken aback. The neighbourhood seemed quite dodgy with gated old storefronts, rundown apartment buildings and scruffy people smoking from chairs on the sidewalk. Others pushed shopping carts loaded with pop cans and beer bottles.

We were meeting Robin for dinner and had arrived a bit early so we hesitantly decided to go for a walk around the block. We found a park dotted with homeless people napping on blankets, though there were some children and families playing at the playground. We also saw a fascinating example of “green graffiti” where people grow flowers, herbs and vegetables from a flowerbed on the wall.

At the appointed time we went into the restaurant, fully expecting it to be a dingy little place matching the neighbourhood in which it was located. Instead we found a lovely clean space with brick walls, lit by lanterns and candles. It was a bit disorienting actually coming in from the street, but what a pleasant surprise! And the food was just as nice. We had little steamed buns stuffed with beef/squash/squid, chicken lemongrass soup, lamb ribs, sweet and sour ribs, smoked pig’s snout fried rice, and a delicious mango rice pudding.

With full tummies we continued on to our evening of Shakespeare and enjoyed an energetic performance of The Taming of the Shrew. This production set the play in the Empire period with costumes of the same historical period and a set inspired by a pastoral landscape. However, the peace of the landscape was juxtaposed with the war of words and wits we saw played out between Kate (the shrew) and Petruchio (the man who volunteered to marry her and tame her for the sake of her dowry).

It’s an interesting play really, which actually feels a bit uncomfortable when viewed through modern lenses. In the end, Petruchio “tames” his new bride to the point that this previously free spirit defers to him even when he claims the moon is the sun and she makes a big speech about how wives should obey their husbands.

It doesn’t need to be uncomfortable though. In my opinion, through their exaggerated relationship, we learn about compromise. Petruchio uses his outrageous tactics to show Kate that it is better to play with him than against him and in the end they are partners and she seems happy. Also, though Petruchio’s initial motive was money, it appears that he sees the potential in her that no other man saw and falls in love with her.

You probably didn’t come looking for a literary/theatrical analysis, but there you have it. Today’s “Journey with Jade” took you into the world of Will Shakespeare.

On a somewhat related note, I have decided that Baptista’s strategy to marry off his eldest daughter is a good one. My younger siblings will not be allowed to get married until I do (except for Kent who cheated and got married while I was a missionary.)
Posted by Jade at 11:08 PM 1 comment:

Labels: Bard on the Beach, Shakespeare 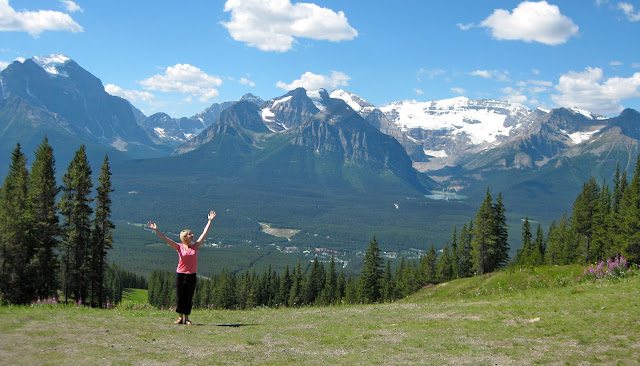 For me, travel is usually about the destination. I don't really like flying and long car rides don't really appeal to me. And yet, all these I endure for the joy of visiting a new place.

However, a semi-spontaneous trip on the B.C. Day weekend was about the journey as well the destination (considering we were only there for just over 12 hours).

On Sunday afternoon (after I returned from a conference in Kelowna) Robin and I packed some overnight bags, stocked the car with a good supply of munchies and set out on a road trip to Lake Louise, AB — a northeast journey of just over six hours.

We knew it was a long way to travel for a very short visit, but saw it as an opportunity to see (if briefly) the many little B.C. towns along the way.

We passed through Kamloops, Chase and stopped for dinner in Salmon Arm, which was bigger than I had imagined it to be. Salmon Arm, located on the shores of Shuswap Lake has a population of about 17,000 (compared to Merritt’s population of about 7,000). We drove around for a bit trying to decide where to eat and made a lucky find. We found a restaurant called the Wicked Spoon — a café/grill with a delightful assortment of fusion dishes. I had a lamb burger – a lamb patty served on naan with feta, olives, red onion and tzatziki — and Robin had their dinner buffet, which included salmon so we got to sample some salmon in Salmon Arm!

Once we were full we continued the journey through a little town called Canoe, which most people have probably never heard of before, and on through Sicamous, Revelstoke and Golden. On the way we passed a few interesting attractions, which we made note of planning to visit on the return journey the next day.

We finally reached our destination at about 1 a.m. local time (I may have dozed for the last few hours of the journey) and located the hostel we had looked up on the Internet — the Hostels International-Lake Louise Alpine Centre. Luckily we thought to reserve a spot, so although we got there well after the quiet hours, there were two spots left for us — one in a boy’s dorm and one in a girl’s dorm.

I had to quietly sneak into bed and didn’t get to appreciate the hostel until the morning when the sun came in through the window. It was a cozy little room that housed up to five people with a bunk bed on the bottom floor and three beds in loft bedroom accessible by a steep wooden staircase. It was nice and clean and I didn’t even have to wait for a shower. While I got ready in the morning I chatted with one of my roommates — an Irish girl named Louise as luck would have it — who suggested we visit the Lake Louise Ski Area for a ride up the gondola and breakfast, so we did.

The ride up the mountain in an open-air chair cost $27.75, but for only $2 extra, we enjoyed a buffet breakfast at the bottom in the lodge. Those who know me and my miserly ways will understand this was a deal too good to pass up. The breakfast was decent, but the view from the top of the mountain was spectacular. We saw a real life panorama of the majestic snow-capped Rocky Mountains and nestled in a valley was the icy blue waters of Lake Louise.

We enjoyed the view for a spell, visited a Wildlife Interpretive Centre and then descended the mountain. What an experience to be suspended in the chair lift surrounded by so much beauty and silence — definitely worth the long car ride the day before.

Seeing the lake from the top of the mountain was not good enough, so naturally that was our next destination. Apparently it was also the destination of thousands of other people. We eventually opted to pay for parking at the Chateau Lake Louise instead of driving in circles waiting for a spot in the public lot.

The lake was lovely and painfully cold as I discovered when I dipped my feet in the clear blue water. I would have loved to go hiking around the lake — there are plenty of trails in the area — but our tight schedule wouldn’t allow it.

Inside the chateau we learned a little bit about the history of the lake, named after Princess Louise Caroline Alberta, fourth daughter of Queen Victoria, and of the chateau, which evolved from a log cabin built as a day lodge for visiting mountaineers. From the beginning it seems the area was meant for a tourist destination and the Canadian Pacific Railway imported Swiss guides to develop the extensive trail system. And the tourists have never stopped coming.

I would have loved to dine at one of the chateau’s many restaurants overlooking the lake, but after a brief tour it was time to hit the road.

On the return journey we stopped to visit a Merritt friend and his wife in Golden, where I had crème brulee for lunch at a pleasant place called the Whitetooth Bistro and then continued on with plans to visit some of the previously noted attractions.

Unfortunately, the journey between Golden and Revelstoke (about 150 kilometres) took us nearly four hours because of an awful traffic jam. It was really terrible to be crawling along so slowly for so long along the two-lane highway. At one point, cars travelling the opposite direction near Rogers Pass were stopped completely and people were standing beside their vehicles or sitting in the road. We began to suspect a Zombie Apocalypse and didn’t know if we were heading towards it or away from it. Later we learned a car accident was the real cause of the jam.

The delay meant we had to pass up the Three Valley Gap heritage ghost town, as well as The Enchanted Forest. Though we didn’t have time for it, we briefly stopped at the Craigellachie historic site — the place where they drove the last spike of the transcontinental Canadian Pacific Railway on Nov. 7, 1885. It was dark and rainy, but I couldn’t pass up stepping foot on a historic spot and I didn’t want that traffic jam to steal all the fun.

We eventually spotted the familiar lights of the Nicola Valley close to midnight, and I was grateful for my own bed when I reached it, but I was pleased with our adventure.
Posted by Jade at 10:13 PM 3 comments:

Labels: Lake Louise, road trip
Newer Posts Older Posts Home
Subscribe to: Posts (Atom)
"Travel is fatal to prejudice, bigotry, and narrow-mindedness, and many of our people need it sorely on these accounts. Broad, wholesome, charitable views of men and things cannot be acquired by vegetating in one little corner of the earth all one's lifetime."
Mark Twain