This two syllable, alliterated phrase conjures up all sorts of emotions in a Vancouverite. Fear. Determination. Anxiety. Courage.

Grouse Grind. Two short words that represent 2,830 stairs, or 2.9 kilometers up the side of a mountain when used together.

Combined, these words mean an 853-metre elevation gain to reach a summit that is 1,127 metres above sea level.

Perhaps, this hiking trail to the top of Grouse Mountain — often referred to as “Mother Nature’s Stairmaster” — is to Vancouver and its visitors, what Mecca is to Muslims (a pilgrimage), or what Goliath was to David (the ultimate challenge).

Some are content to reach the top only once in order to cross it off their bucket lists, while others take the challenge again and again, swiping their Grind Timer cards at the base of the Grind and at the top, hoping to achieve a personal best, or better yet, break a course record.

With this nearly mythical hike relatively close to me, I’m sure those who know me are not surprised that I have taken the challenge myself on several occasions. Most recently, I made the climb last Saturday.

My friend Marie and I made the drive to the base of the mountain through slightly soggy weather to meet some of her co-workers who hoped to complete the epic hike for the first time. At least, I told myself, the narrow climb will be less crowded in the rain. Not so. The parking lot was as full as ever.

We waited in line for the washroom, took a “before” photo as a group and then checked our watches and began our climb.

This was my third time doing the Grouse Grind, and it doesn’t really get any easier. Don’t get me wrong, the Grind is manageable — people of all fitness levels can make it to the top — but it is hard. At times natural boulders and roots serve as steps in this stairway to heaven, while other sections of the hike are slightly more manicured for safety and to prevent erosion.

A big, bright yellow warning sign at the base of the trail and then partway up reminds hikers that the Greater Vancouver Regional District is not liable for personal injury or death that results along the trail, which is understandable considering how steep and sometimes slippery the stairs can be.

The first quarter is the hardest (or so say many experienced hikers) and when you first catch a glimpse of the quarter mark, the incline appears to be just shy of 180 degrees. (Though on Saturday, I didn’t really feel like it eased up too much after that.) My advice for beginners is to keep your eyes just ahead of you. This way you won’t be discouraged by the steep trail in front of you. You’ll also be sure not to trip or lose your balance. Each quarter of the trail is marked, and if you keep an eye out for the markings on the trees, you’ll count about 40 trees to the top.

Also, as a courtesy, keep to the right side of the trail where possible. The topless, muscular men jogging to the top of the mountain will appreciate this. As I’ve alluded to, on any given day the trail is extremely well used. Most people are friendly and encouraging, willing to move aside if necessary or pause to let you step aside. Other people are sweaty and grumpy. On the whole though, there is a feeling of camaraderie as everyone attempts the climb together.

I like to people watch and on Saturday I saw all shapes and sizes and heard several different languages on my way to the top. There were older people with hiking sticks, young children who sprightly hopped up steps that seemed as tall as their waists and lots of ladies sporting Lululemon. Though I caught bits and pieces of conversation, mostly I could hear the pitter patter of rain drops falling on the leaves and the harmony of heavy breathing.

When Marie and I finally sprinted the last stretch and tagged the timer at the top, we clocked a time of one hour and forty minutes (by our watches). Not nearly our best time, but we backtracked at the quarter mark to encourage those behind us and burned some extra calories along the way.

At the top of the mountain, we treated ourselves to some lunch and caught the tail end of the lumberjack show before paying $10 to descend in the gondola.


Does this now legendary hike live up to all the hype? Well, you’ll just have to take the challenge and decide for yourself. As for me, that certainly won’t be my last trek up the mountain.
Posted by Jade at 11:42 PM 1 comment:

In 17 months, a lot can happen in a person’s life. You could get married and have a baby. You could buy a house. You could win the lottery (or you could lose all of your money). You could move across the country. You could even (almost) serve a full-time mission.

Since February 12, 2011  — the date of my last blog post — none of these things has happened. I still live in Merritt. I still work at the Merritt Herald. I still stay in my little apartment with a view of the Merritt Funeral Chapel. And, I still occasionally get locked both inside and outside of my apartment.

That’s not to say my life has been uneventful over the last year and a half. I’ve managed to keep myself busy.

Each year the Herald publishes a ‘Year in Review’ as the last paper of the year. This post is my attempt at a review of the last 17 months.

• In June 2011, I became the editor of our little paper, which publishes twice a week on Tuesdays and Thursdays.

• That same month, I ran my first half marathon — the Seattle Rock ’n’ Roll Half Marathon — which I completed in 2:04 plus a few seconds.

• Last year, I formed an alliance with a competitor  — the reporter from Merritt’s other newspaper. We still frequently compete in eating contests, like this Canada Day watermelon-eating contest, and the annual corn eatin’ contest in September. We also still try to scoop each other on the good local stories. 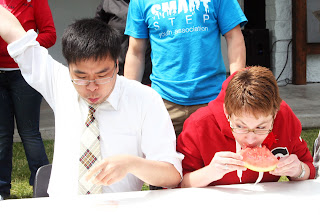 • In July 2011, I experienced the notorious Merritt Mountain Music Festival, which I covered for the paper. For four days I explored the festival grounds, hung out in the media tent, enjoyed my backstage privileges and took up close and personal photos of the country artists while they performed on the main stage. If you look just below Dierks Bentley’s hand in this photo, you can see me with my camera. 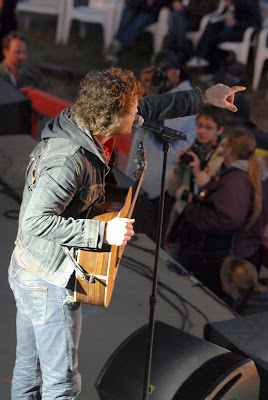 That same weekend, I performed some folk songs from Merritt’s downtown stage with Johnny Cash looking on in the background. One day I’ll be able to tell my kids that I’ve performed in the Country Music Capital of Canada. 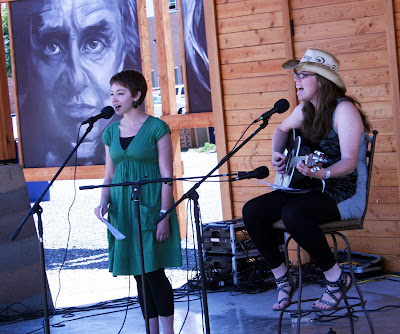 • Later that summer, I made my theatrical debut as Lilly Priest in “Happy 100 Merritt,” a play to commemorate the city’s 100th anniversary. It was definitely a step out of my comfort zone, but at least I can cross that one off the list. 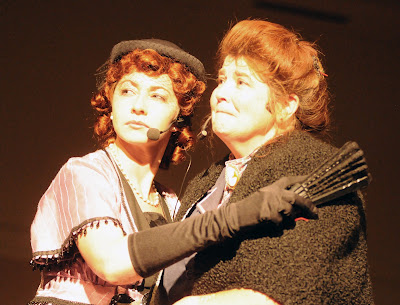 • By the time August rolled around, I needed a break. So, I hopped on a plane bound for Hawaii where I visited with some Temple Square sisters and explored the island. 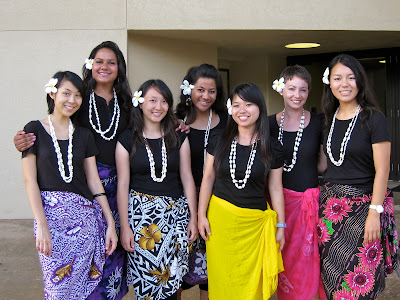 • About six months later, I was able to go on another adventure and visited my home and native land (South Africa) with my family. We visited family, went zip lining, rode elephants and ate lots of biltong. 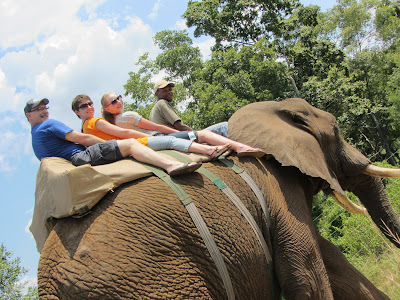 This list is by no means exhaustive — just a quick glimpse into my life over the last year and a bit. Stay tuned for more adventures to come.
Posted by Jade at 11:27 PM 4 comments: