Lions and hippos and bears ... oh my!

As it turns out, you don't need to travel to Africa to have wild animals in your backyard. Last week we had a mamma bear and her two cubs pay our backyard a visit. Unfortunately I didn't actually get to see them. We only found out the next day when one of our tenants (who live in the basement suite which is accessed through our backyard) told my dad. It made more sense then why they had been banging pots loudly at eleven o'clock at night when I was trying to go to bed. I guess it was their barbeque that attracted the bears in the first place, but they successfully chased the bears away.

The only evidence that we had bears is a claw mark they left in the plastic foam that covers the legs of our trampeline. So maybe it wasn't the barbeque, but the trampeline that lured those little baby bears over the fence! But seriously, it's not really a good thing to have bears frequenting your backyard. If they've come once, they are likely to come again and can be rather dangerous. Just within the last few weeks there have been some bad bear attacks in the area; one lady was attacked in the middle of the day with she was gardening and barely made it out alive.

Last summer I had a bear encounter of my own when I was going for a morning run. I guess I must have been "in the zone" because I was listening to music and looking straight ahead when I found myself just across the cul de sac from a big black bear. The bear, who was standing up tall eating from a garbage can, had had the advantage of watching me run up the road. When I noticed him, he was looking right at me. I had never really been scared of bears before. Usually when I saw them I was in a car, or at least at a safe distance away. But this was too real and I was terrified. At first I was frozen not knowing what to do and we stood there looking at each other, but when his ears twitched I decided very quickly what to do. I turned round and ran as I have never run before not stopping until I made it back to my house. That's not true. I stopped once at the bottom of the street to inform an Asian lady of the bear up the road. I hope she understood me; I don't know how much English she spoke.

Later on when I told people what had happened someone said, "but you aren't supposed to run away from a black bear are you?" I looked it up and found that if you happen to encounter a black bear, the best thing to do is play dead. To be honest, I acted on instinct and the thought never crossed my mind. But who in their right mind is going to lie down and play dead in a situation like that? I guess I'm just lucky that the bear didn't decide to run after me, because I don't pretend to believe that I could have outrun him.

Anyway, enough on Canadian wildlife. The real reason I am blogging is to post a video my brother took of the wild African lion we saw eating a Kudu, so enjoy!

P.S. I have also added links to my newest facebook photo albums.

Probably the main thing that stuck out to my family during our visit to South Africa was the increase in security. Safety was already a concern when we lived there; burglar bars and security gates covering our windows and doors were a normal part of my childhood, as were the big walls that surrounded people’s homes.

Even though we’d heard reports of how it had only gotten worse, it was still a bit of a shock coming from Canada to see all the precautions that need to be taken to stay safe. For example, almost every home or property is surrounded by an electric fence. At the shopping centres there are guys who are employed to stand in the parking lot and watch the cars. Because they each have their own area to protect, they eagerly direct you to a parking stall when you arrive and then direct you as you back out in hopes of a good tip. And along the highway there are even signs that indicate where the “High jacking hotspots” are. (We had to take drive-by photos of these because of course it would have been unwise to stop there even for the sake of a picture.) Almost everyone has a story of how they were hi-jacked, robbed or held at gunpoint but in spite of this, people adapt and life goes on.

Luckily we came home with only one safety related story and it is a humorous one. At the airport in Johannesburg it has become a “trend” to have your suitcase plastic wrapped to ensure that the items in your suitcase are intact when you collect them at your destination. Before checking in your luggage you visit a wrapping station where you can have your luggage secured at 35 Rand (approximately five dollars) per case.

Unfortunately, on the evening we flew out, the only machines that were working were operated by a particular airline and were for their customers only. After asking a few people if they couldn’t help us anyway, one “wrapper” beckoned for us to follow him. When we were a little way off, he explained he could help us (at 30 Rand per case) but he could only take one suitcase at a time so that he wouldn’t be caught. This airline, you see, offered this service to their customers free of charge, and by doing us this favour he would be earning some pocket money. (His money-making scheme was not unique – all of his co-workers were making similar deals with other people and were trying not to get caught themselves.)

We agreed to the deal, but said that one person needed to come with him to make sure he didn’t walk off with the suitcase. He refused because he didn’t want to get caught and lose his job, however, my Uncle Mark quietly walked to a place where he could keep an eye on our new friend, so we agreed to his terms. Just before he walked away with the first suitcase he said, “Ok, just pretend you’re sitting around or something.” I thought this was quite funny because we were a very large group and therefore we were very conspicuous.

After wrapping each suitcase he tried to be very stealth; he would walk by wheeling the wrapped suitcase and without looking at us, he would leave it in front of us. A few feet further he would turn around and walk back, and as he passed I would have the next case waiting in his path so that he could grab the handle and take it without stopping.

When four of our six bags were wrapped he wanted my Dad to pay him, but we said no, we would pay him when he had finished the last two. He wasn’t happy about that – he wanted to make sure that if he got caught he would still get the money for his efforts. We agreed to pay him part of the sum when all of a sudden he walked off. At first we just thought he was trying another decoy (earlier he had taken one of the bags up to the check-in counter before bringing it back to the machine to try and look less-suspicious), but when he didn’t come back we started to get confused. After a few minutes I looked up and saw him beckoning to us from behind a column a few feet away. Thinking he wanted his half-payment, my brother went to give him the money. But when Kent got there, the guy, obviously distressed, asked him, “Who’s that man?” Kent didn’t know which man he was talking about. “Who’s that man over there?” When Kent realized he was talking about my uncle it took a while to convince him that he was family. He must have seen my Uncle Mark watching him, and he had assumed that Mark was his boss and he was going to get fired.

In the end, we got all six suitcases wrapped, he got his money and I assume he kept his job, and I must admit I was very amused by the whole thing. Not only did no one steal anything from our suitcases but we were able to easily recognize our bags in Detroit and Seattle as they came round the conveyor belt. For some reason no one else had plastic wrapped their bags. And our shuttle driver was quite disgusted that the airline had managed to destroy all of our bags until I explained to him that the bags were fine – we had just flown from South Africa. 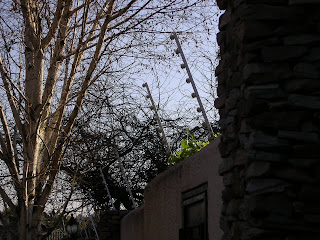 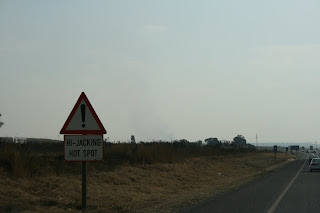 This photo speaks for itself. 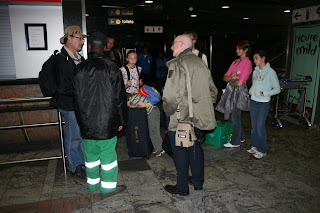 Negotiating with the plastic wrapper at the airport. 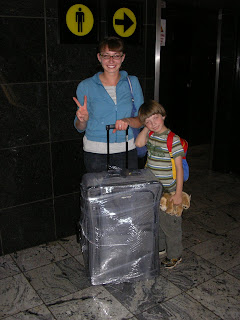 The result - my securely wrapped suitcase.
Posted by Jade at 9:20 PM 1 comment:

Labels: family vacation, South Africa
Newer Posts Older Posts Home
Subscribe to: Posts (Atom)
"Travel is fatal to prejudice, bigotry, and narrow-mindedness, and many of our people need it sorely on these accounts. Broad, wholesome, charitable views of men and things cannot be acquired by vegetating in one little corner of the earth all one's lifetime."
Mark Twain