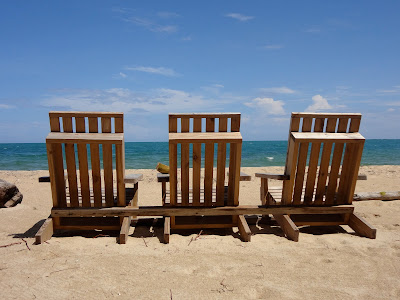 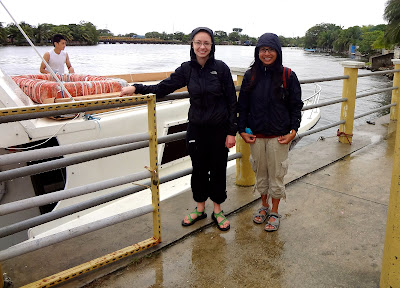 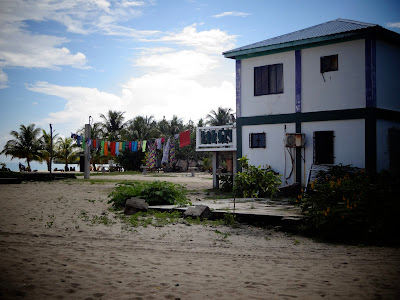 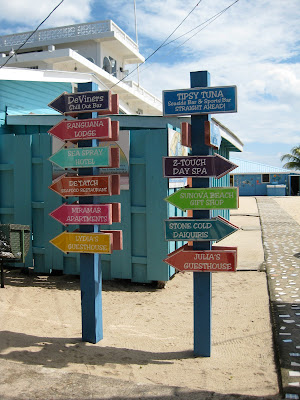 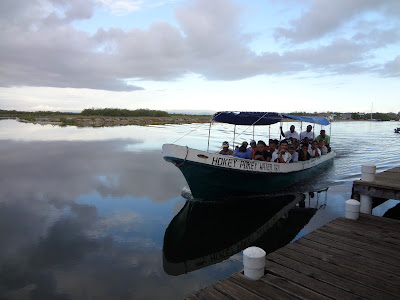 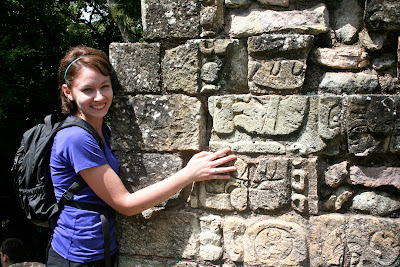 It has been extremely interesting to learn about the Mayan civilization. Their history of human sacrifice aside, the Mayans used cacao (cocoa) as money, drank chocolate during their wedding ceremonies and viewed Jade as their most precious stone, and these are things I can get behind.

We got our first taste of Mayan architecture in Copan, Honduras. This site in western Honduras, not far from the Guatemala border, is considered one of the most impressive of all Mayan sites, not because of its size, but its legacy of craftsmanship.

We entered the site through the west court of the Acropolis and the sight of the stone temples, hidden behind the trees only a moment before, was rather breathtaking.

I’m normally quite a miser, but I happily paid the extra cash to get a guided tour of the site and it was worth it to have our own guide so that we could ask questions throughout the tour. I even paid the $15 extra to tour the tunnels, which allowed us to view the temples that have been discovered underneath the ones visible from the outside. (Apparently each new ruler would build bigger temples than the last ruler. Sometimes they would destroy the old temples and other times they built over top.)

We also learned about the Mayan ball game. Though it has been hard to decipher the rules, many archaeologists believe that the captain of the winning team was sacrificed at the end of the game — an honour to enter the afterlife.

These ancient sites are a history-lover’s playground and it was amazing to explore the site at our leisure after the tour and climb to the top of the temples that were open for climbing.

Closer to the tail end of adventure we also visited Tikal in Guatemala — a site that our guide book describes as possibly the most renowned of all Mayan ruins. Tikal includes several giant temple pyramids, the largest of which rises to 64 metres above the forest floor. Thousands of other buildings dot the landscape, many still covered by trees, roots and earth.

We had read that it was possible to book a sunrise tour and watch the sunrise from the top of the temples. So we booked a tour and were ready by 4:30 a.m. for our shuttle. In fact, the shuttle didn’t arrive until just before 5 a.m.

I hear in Guatemala you have to add half an hour to all time estimates and this is all very well, except that the sun doesn’t follow these rules. The sun rose as we travelled the hour journey to the park and it was light by the time we arrived. It didn’t seem like any other groups made it earlier and the park only opens at 6 a.m., so I guess it was just a case of false advertising.

Otherwise, the tour of was great. Our guide showed us the ruins and shared facts about the flora and fauna. He picked up a big, black tarantula and pointed out monkeys and a poisonous snake.

The temples were impressive and we climbed three or four including Temple IV, the highest in the Mayan world. It was also neat to see the temples that have not been uncovered yet. I would easily have mistaken them for hills covered in plants and trees.

I’ve always secretly wanted to be an archaeologist and exploring the ruins only renewed that desire. I’m just not sure I could handle working alongside the tarantulas and poisonous snakes we encountered in the jungle. So, for now, I’ll keep the Mayan culture alive by indulging in their favourite treat — chocolate.

Labels: Central America, Copan, Tikal
Newer Posts Older Posts Home
Subscribe to: Posts (Atom)
"Travel is fatal to prejudice, bigotry, and narrow-mindedness, and many of our people need it sorely on these accounts. Broad, wholesome, charitable views of men and things cannot be acquired by vegetating in one little corner of the earth all one's lifetime."
Mark Twain