She climbed out through the front room window 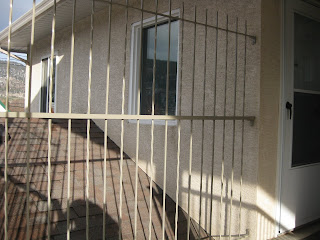 This morning I hit the snooze button one too many times and so by the time I put on my coat and gathered my bags to leave for work, I was already ten minutes later than I should have been. I wasn’t too concerned; as long as I made it there in time for my first interview at 9 a.m. it would be fine.

I reached for the bolt and attempted to unlock my front door unsuccessfully. Though the bolt turned, it did not turn all the way.

It tends to stick sometimes so I wasn’t worried at first. I leaned against the door and tried again, which usually works, but not this time. A few more attempts using all of my strength, and a few kicks for good measure and still nothing. That’s when I got that sinking feeling, as I realized I might not be able to get out.

I considered phoning someone, but was worried it might turn out to be something silly. Yesterday at work for instance, someone couldn’t understand why the door wouldn’t close and it was nearly driving her crazy. I opened it, kicked a few pebbles out of the way with my feet and closed it properly again. However, it soon became clear this was not a matter like the pebbles — my bolt was most definitely jammed.

I don’t have the number for the landlord or Tom, the maintenance man, in my apartment like I should, so I couldn’t call them. Instead, I phoned my friend Robin who lives down the corridor and asked him to go knock on Tom’s door for me, which he kindly did. In the meantime, I phoned the office and explained to them that I was locked in, but that I would try and be there shortly. (They laughed and told me that was an excuse they had never heard before.) I also began to look for a second way out.

Unlike the other apartments in my building, because I am on the corner my window doesn’t open on to the corridor. Rather, it opens on to the roof of a perpendicular building, and there is a metal fence blocking the roof from the walkway. I popped out my screen and stuck my head out to take a look. I am not afraid of heights and climbing on roofs is as natural to me as riding a bike. In fact, as a child I used to be able to climb up a tree and on to the roof of our garage where I spent many hours playing, so this task seemed quite manageable. However, though climbing out might get me to work, it would not solve the problem, so I waited.

Tom came and tried the door from the outside with no success, so I told him I would just climb out. He was worried and went to fetch a ladder for me to get down.

Since at this time I am a career woman and I have no prince charming I couldn’t be bothered waiting around in my tower for long (after all, my hair is much too short for me to play the part of Rapunzel) so I decided to rescue myself. I easily climbed out the window, walked over the roof and climbed over the metal fence.

When Tom returned he looked rather surprised to see me walking across the parking lot with my camera bag and purse on the way to work as if that was how I exited my apartment every morning.

Don’t worry, I did make it to work in time for my interview and Tom did eventually manage to fix my lock for me, so all is right in the world.

[I realize my poor blog has been rather neglected. I have had every intention of writing and lots of ideas, but not a lot of time. However, my adventure this morning inspired me and I am determined to be better.] 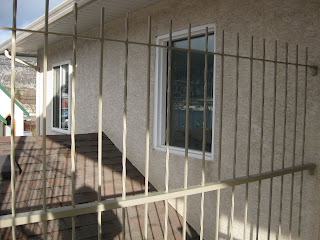 The far window is the one that I climbed through. It kind of looks like I live in jail ... or South Africa. 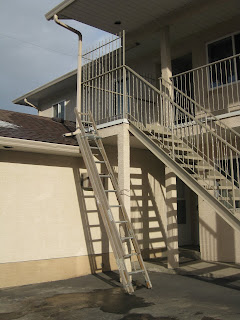 I climbed over the fence. Tom had to use a ladder to get up onto the roof.
Posted by Jade at 12:44 AM 2 comments:

Labels: Merritt
Newer Posts Older Posts Home
Subscribe to: Posts (Atom)
"Travel is fatal to prejudice, bigotry, and narrow-mindedness, and many of our people need it sorely on these accounts. Broad, wholesome, charitable views of men and things cannot be acquired by vegetating in one little corner of the earth all one's lifetime."
Mark Twain