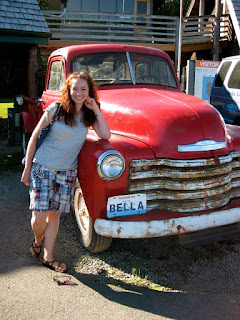 I didn’t want to read Twilight.

Years ago, I didn’t want to read Harry Potter for the same reason. When I finally gave in to the world of wizardry I found myself dressing up for the movies and lining up at midnight for books I had pre-ordered, as well as referencing spells in every day speech.

I finally gave in to Twilight as I guess deep down I always knew I would. Now, four books, a novella, and three movies later, my friend Marie and I found ourselves embarking on a road trip to Forks, Washington.

(Not wanting to be alone in my shame, I had introduced Marie to the literary crack. She ate it up like a newborn vampire thirsting for blood. I fed it to her one book at a time and felt like a dealer every time I gave her a new book.)

When Marie first jokingly suggested visiting Forks I laughed – then I thought, why not? Forks was as good a destination as any for the road trip we were planning and after some research we found that situated on the Olympic Peninsula there were some good camping and hiking spots nearby. To our credit, if we could have gone to England for an Austen tour or a Shakespeare tour, or even a Harry Potter tour we would have, but that was a bit out of our budget, so Twilight it was.

It’s a funny thing when you tell people you’re going to Forks, Washington. As obscure as it is, most people know what you’re talking about (even the ones who make fun of you) and ask, “isn’t that where Twilight takes place?”

Just getting there turned out to be an adventure – we accidentally left on Friday the 13th (not the safest choice when visiting the home turf of vampires and werewolves). Suffice it to say we missed our intended ferry, had to cancel our hostel reservation and almost slept on a tarp in the forest. Instead we found one of the last remaining motel rooms in Port Angeles and I managed to haggle with the Korean manager and get a $10 discount. 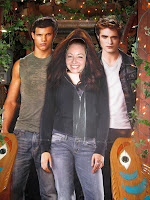 The next morning we had a quick look around Port Angeles and then drove one more hour out to Forks, a town so small if you blink you might miss it. Our first stop was the Chamber of Commerce where we picked up directions for a self-guided Twilight Tour. (Others apparently opted for a more professional tour – the Twilight Tour Bus was close on our heels all morning). We got to the chamber too early and while we waited for it to open, we took pictures by Bella’s red Chevrolet truck parked in the lot. We weren’t the only ones. I was really amused as people of all colours, shapes and sizes began filling that parking lot – some of them (usually males) obviously there by force. We frequently ran into these people at the various tour stops and would occasionally take pictures for each other or ask directions. I guess you could say we were one big happy Twilight family.

The tour took us past the Swan home (some random house on “K Street”), Dr. Cullen’s parking spot at the hospital, Forks High School, Forks City Hall (a building which included the police station, courthouse and probably jail as well), and a bed and breakfast designated as the Cullen Home. The whole thing probably took less than an hour.

More than half the businesses in Forks, La Push and even Port Angeles seem to be capitalizing on the Twilight craze. We saw places like Bella Italia, Dazzled by Twilight, Jacob’s Java and even Twilight Firewood. I suppose you can’t blame them. I’m not sure how they survived economically before Twilight. No wonder they have a day designated as Stephanie Meyer Day (which happens to be on September 13th, Bella’s birthday, in case you’re curious).

By lunchtime we had completed our Twilight tour and decided to leave the vampire world behind. We drove to La Push, crossed the clearly marked treaty line and were greeted by a sign that read, “The Quileute Tribe welcomes Twilight fans.” We appreciated the warm welcome. We intended to enjoy our stay. We paid fifteen dollars to camp on the beach, set up our tent and enjoyed a baking hot afternoon in the sun (and the water).

The weather was gorgeous all weekend. The only glimpse we got of the usually cloudy, Vampire-friendly landscape was Sunday morning when we woke up to gray skies and thick mist covering the beach. That was our cue to leave. My only regret was not meeting any handsome werewolf boys at La Push.

In the end, despite our efforts to convince ourselves that we were not really Twilighters, when the Canadian border guard asked Marie what the purpose of our visit had been she said, “to visit the Twilight sites.” And I suppose that’s the truth. Just don’t tell anyone. 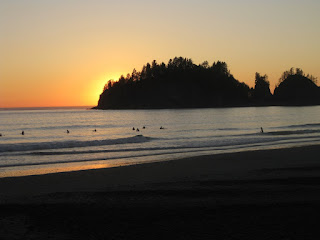 On the beach at La Push. 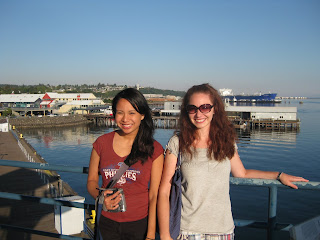 A morning walk in Port Angeles.
Posted by Jade at 11:07 PM

Haha, what a great summary of the trip Jade!!! I really enjoyed this post.

And you're right, I suppose we are Twilighters. Ugh. For shame. :)

LOVE IT!! haha, so you finally gave in and read them?! Good for you. It makes me feel better about myself for liking them!

How fun! Keep enjoying random trips while you can! I'd love to pick up and go on a road trip without a child! My brother is serving in Oregon and has sent pictures to my sisters of a beach where I guess they filmed some twilight stuff! I hear it is beautiful!

I wish I could have come with ;)

Sounds like a fun trip! :) Glad you guys had a good time.

Jade,
First of all, your long hair is beautiful! Second, I still looove reading your writing. And Third, I've avoided the third Twilight book for a similar reason, not wanting to like it and be part of the fad :). Although I did just watch the first movie with my sister-in-laws. The book was better.

You are such a great writer Jade! I love reading about your journeys. :) I enjoyed Forks, but really liked La Push. It is soooo pretty out there! We didn't do the tour though. I don't think Brett would have agreed to that!

Jade! I'm so glad you found my blog. I have loved reading your blog. I'm not a Twilight fan myself, but it looks like you had loads of fun! I love your writing.
I wish you were over here with me as well! It would make things a lot more fun. :)
Keep in touch my dear! For reals.

I am glad to read about your exotic vacations based on books and movies even if Isaiah is against Twilight as found in Isa. 1: 14 Your new moons and your appointed feasts my soul hateth: they are a trouble unto me; I am cweary to bear them. Your next exotic trip should send you out to see League Stadium in the beloved town we reside where A League of their own was shot. Of course we probably will see you first as our house is probably going to sell depending on where you are.