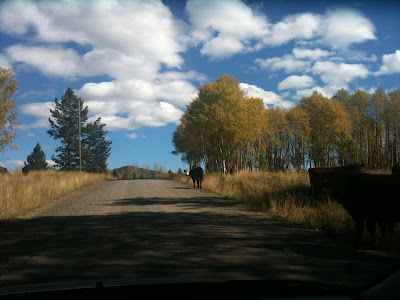 I’ve been in Merritt two weeks and four days now, and so far I’m enjoying life as a small-town reporter. Several people have asked me what I write about and the best answer to that is everything. With an editorial staff of two (my editor and I), I am getting all sorts of assignments from corn eating contests to city council meetings.

On Saturday I had my first visit from friends from the outside world. Marie and Cody braved the drive up here (which was an adventure in itself as they were beyond Hope and nearly ran out of gas). Luckily they arrived safely and Merritt rolled out the red carpet with 50’s Day Celebrations and Canadian National Retriever Championships, proving that there are things to do in Merritt. This also meant that they got to be my assistant reporters for the day.

First we went for a stroll along Quilchena Ave to have a look at the 50’s Day festivities. (The event was planned as a fun community event to promote the downtown businesses.) We bought some hotdogs and Marie and Cody kindly sat on the sidewalk and waited while I snapped some photos of a hula-hoop contest. After admiring the costumes and cupcakes it was time to move on.

The next item on the agenda was a visit to the Kane Valley to have a look at the Retriever Championships. A thirty-minute drive turned into an hour when we took the scenic route by accident. The directions we got were not incorrect; it’s just that they took us to the wrong side of the Kane Valley, which meant we had a lovely drive along country roads. 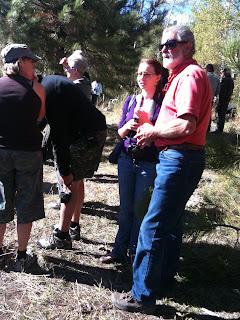 One of our greatest amusements along the journey was driving over the cattle guards. I have crossed several in my lifetime without it ever occurring to me that the car was not supposed to bump uncomfortably across the grate. Cody, who is apparently a country boy at heart, quickly figured out that if we lined the car up correctly we could drive smoothly across the tire tracks. It’s a good thing he did, because we must have crossed at least a dozen by the time we reached our destination.

We also discovered that where there are cattle guards there are also cattle. We passed several right at the side of the road and stopped to take some pictures of them. They actually looked pretty mean and glared at us, which made me nervous they might try and charge my car. Luckily they didn’t.

At one point, Marie remarked that our drive reminded her of the song Country Roads and I apologized for not having any John Denver songs at hand. However, Marie discovered that she had reception and so she found the song on YouTube and played it from her iPhone. It helped set the mood of our country drive, but I admit it was comical that we needed the iPhone to fully appreciate the country.

We finally found the championships and once again, Marie and Cody kindly let me spend some time chatting with the chairman and some participants. At one point I lost them though and wandered up and down the dirt road looking for them. I even stopped a lady to ask if she had seen any “city folk” around. I finally found them sleeping on a picnic table.

Finally we drove back to Merritt and ended our day with dinner at the Hitch’N Post, a western restaurant just outside of town. I’m glad my friends are such good sports! 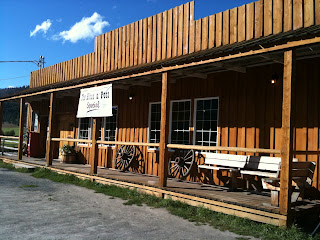 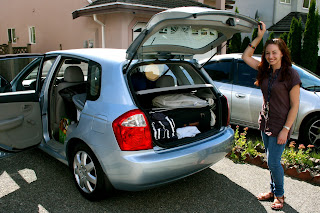 On Wednesday I loaded everything I could fit into my little car (a task that could only be accomplished using my Tetris skills) and set off for Merritt, British Columbia.

Merritt, located about three hours northeast of my home in Coquitlam, is a small city with a population of approximately 7000 (twice the size of Forks, WA). Though small, even Merritt has its claim to fame. You see it claims the title of “The Country Music Capital of Canada.” I do like country music, but that wasn’t what induced me to move out here. Rather it was a job at the local paper, The Merritt Herald. 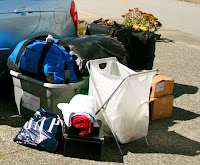 As I sit here on a storage container in my little apartment (I don’t have any furniture yet) I still can’t really believe that I’m here. It could be the shock of all of a sudden finding myself in a small town, but maybe it’s the reality that I finally get to be a real life journalist.

When I first got home from my mission in February I was daunted by the task of trying to find a job. I decided to hedge my bets and I enrolled in a TESOL Certificate course through Vancouver Community College. After a very intense month, I was qualified to teach English (to speakers of other languages) and quickly found a job at an English school. Though some of the kids managed to weasel their way into my heart, it wasn’t long before I discovered that teaching wasn’t my calling in life.

Even so, I almost went to Egypt. The subject is still a little sensitive for me, but I was offered a teaching job in Cairo and turned it down. The pay was pretty low, but the real reason I said no was that I didn’t want to put off getting into journalism any more. (That’s not to say I won’t run away to Egypt in the future.)

My teaching contract ended on a Friday. On Monday I prepared for the job hunt – a process I expected to be long and depressing, but I was determined. While I was at my computer I got a tip from a friend that a reporting position was opening up at the Herald. I called the editor and said I was interested in the job. Thursday I drove up to Merritt for the interview and a week later I showed up for my first day of work. And that, my friends, is how I ended up in Merritt. I’d say the timing for all this was pretty miraculous.

Though I’m happy to be back at a paper, I still have some fears about the future (for instance I was told on my first day here that if I stayed in Merritt I would die alone), but I’m sure things will work out.

In the meantime, stay tuned to read about my adventures in Merritt!
Posted by Jade at 8:52 PM 9 comments:

Labels: Merritt
Newer Posts Older Posts Home
Subscribe to: Posts (Atom)
"Travel is fatal to prejudice, bigotry, and narrow-mindedness, and many of our people need it sorely on these accounts. Broad, wholesome, charitable views of men and things cannot be acquired by vegetating in one little corner of the earth all one's lifetime."
Mark Twain